We have reported on spectrally dispersed interferometric AMBER/VLTI observations of the recurrent nova RS Oph five days after the discovery of its outburst on 2006 Feb. 12.

Using three baselines ranging from 44 to 86 m, and a spectral resolution of λ/δλ=1500, we measured the extension of the milliarcsecond-scale emission in the K band continuum and in the Brγ and He I 2.06 μm lines, allowing us to get an insight into the kinematics of the line forming regions. The continuum visibilities were interpreted by fitting simple geometric models consisting of uniform and Gaussian ellipses, ring and binary models. The visibilities and differential phases in the Brγ line were interpreted using skewed ring models aiming to perform a limited parametric reconstruction of the extension and kinematics of the line forming region.

The limited uv coverage does not allow discrimination between filled models (uniform or Gaussian ellipses) and rings. Binary models are discarded because the measured closure phase in the continuum is close to zero. The visibilities in the lines are at a low level compared to their nearby continuum, consistent with a more extended line forming region for He I 2.06 μm than Brγ. The ellipse models for the continuum and for the lines are highly flattened (b/a˜0.6) and share the same position angle (PA˜140°). Their typical Gaussian extensions are 3.1×1.9 mas, 4.9×2.9 mas and 6.3×3.6 mas for the continuum, Brγ and He I 2.06 μm lines, respectively. Two radial velocity fields are apparent in the Brγ line: a slow expanding ring-like structure (v_rad≤1800 km s-1), and a fast structure extended in the E-W direction (v_rad˜ 2500{-}3000 km s-1), a direction that coincides with the jet-like structure seen in the radio. These results confirm the basic fireball model, contrary to the conclusions of other interferometric observations conducted by Monnier et al. (2006a, ApJ, 647, L127). 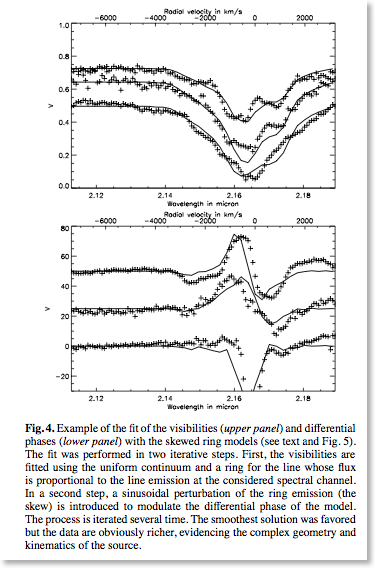 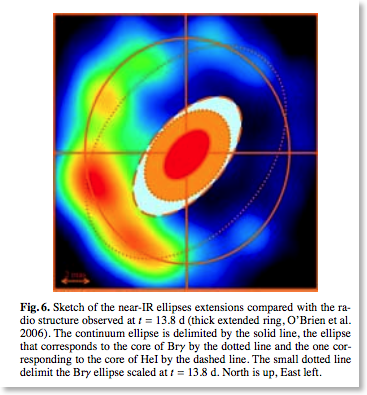 An ESO Press release can be found HERE